On June 24th-25th, Crossfit Forney, located at 20 Mustang Ct, Forney, TX, took a group of six local kids to Atlanta, GA to participate in the 2017 USA Weightlifting Youth National Championships. This year's Youth Nationals was the second largest weightlifting competition ever in the world (second only to American Open two years ago). For many of them, it was their first time competing at a national level of weightlifting; however, they have been training under Mark Khamboonphet's CrossFit Kids program for the past two years. Less than a year ago, Caitlin Everett (10), Bryton Danner (12), Marcos Alex Ruiz (9), Elizabeth Abramson (12) and Coy Whitley (13,) decided they wanted to do a weightlifting meet since it is a major part of their CrossFit regiment. They all got gold their first time out and qualified for the national meet, so the decision was made to focus on lifting once per week in preparation for Nationals.

Below are the results, in order from lightest in weight to heaviest:

32kg snatch, 44kg C&J = 76kg total. 1st place in every snatch and C&J. As a ten year old competing in a 13 year and under class she beat everyone which makes her a double national champion for 11 and under and 13 and under. She still has 3 more years in this category! She also broke 3 state records that were 6 years old. The old snatch state record was 24kg and C&J record was 30kg and total was 54kg. Caitlin will be a 5th grader at Rhea Elementary next year. Her next goals are the American Records for this weight class.

38kg snatch, 44kg C&J = 82kg total. This was 3rd in the nation overall and the 2nd best snatch in her division. Elizabeth will be a 7th grader at Warren Middle School next year.

81kg snatch, 106kg C&J = 187kg total, which was good enough break 3 state records!! Making his 2nd straight appearance a national meet after he lost a tie breaker giving him 2nd place in the nation, this was his first time competing in the 14-15 year old division. He was one of the youngest athletes in the group, and he just moved up to the 69kg weight class. Rees hit lifetime personal records for both lifts. Rees will be transfering from Crandall ISD to be a freshman jackrabbit in Forney High School. 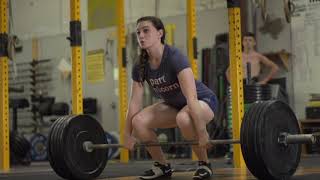